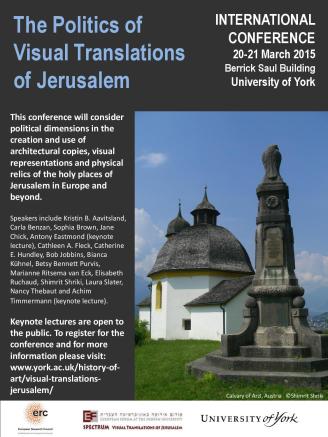 A conference announcement from colleagues at York:

Registration is now open for the ERC-funded ‘The Politics of Visual Translations of Jerusalem’ conference, to be held in York from 20th-21st March 2015.

Further details can be found on the project homepage.

The poster can be downloaded here, and the programme is available here. These, along with details of keynote lectures, can also be downloaded from the conference website. 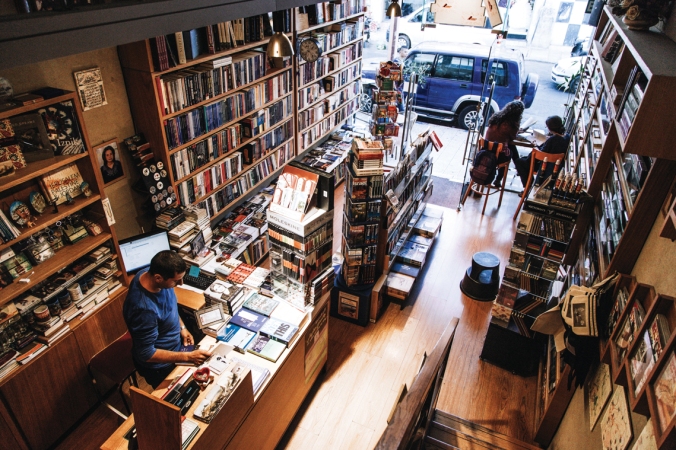 The richly illustrated article is a welcome change from much of the writing we see on Palestinian life in the city, departing from the dominant framework of violence and occupation, and thinking about resistance in a different way.

Stallard tours a number of Palestinian cultural landmarks, including the Al Ma’mal Foundation and Yabous cultural centres, the ‘Palestinian Pottery’ studio and shop, and the famous Educational Bookshop (a true pilgrimage site for visiting researchers).

You can read the article here.

Tower of David, Jerusalem. Shared from Wikipedia under a Creative Commons Licence.

Dana Hercbergs, who spoke at our November 2014 conference Remembering Jerusalem, has written a piece based on her paper for +972 Magazine.

The article discusses the recent proliferation of images of the Tower of David as a symbol of Jerusalem.

The Tower, Dana writes, has appeared on everything from phone books to votive candles, to real estate adverts. It has reached such a level of popularity that it now seems to be replacing landmarks such as the Dome of the Rock and the Western Wall.

But why is this the case? Dana’s piece puts forward a number of possibilities, ranging from the increased visibility of settlers in the occupied City of David, to the potential of the Tower to replace the Dome of the Rock/Western Wall image with one which is on the surface (but barely, in reality) less politically charged.

You can read Dana’s article here.

I blogged about Hugo Blick’s BBC drama The Honourable Woman, starring Maggie Gyllenhaal, here, when it screened in the UK last year.

Personally, I enjoyed the series for its pace, style, and complex female characters, even if I found it ultimately unenlightening on questions of Middle East politics, and was less than impressed by its uniformly negative representations of Palestinians.

That review is here.

Since then, the series has been widely exported around the world (perhaps notably, the press release doesn’t list sales to any Arab countries) and is about to be shown on Israeli television.

The Israeli newspaper Haaretz has published a pre-review of the series, and it’s interesting to read a perspective on Blick’s drama ‘from the eye of the storm’, as the reviewer, Michael Handelzalts, puts it.

The review includes a fascinating biographical tidbit about the Israeli actor Yigal Naor, who plays the shrewd but kindly character Shlomo. Apparently, Naor previously played Saddam Hussein in a BBC drama called House of Saddam (which I’ve not seen).

The casting of an Israeli actor as Iraq’s former dictator seems telling about the attitudes of BBC producers, and western audiences, towards the Middle East. While I wouldn’t deny that an actor can play outside their nationality – the ability to inhabit different roles is, after all, the basis of acting – this casting suggests that Middle Eastern ‘appearances’, accents, and cultures are viewed in the west as essentially interchangeable.

You can read Haaretz‘s take on The Honourable Woman here.