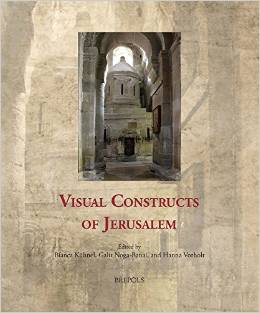 Visual Constructs of Jerusalem is a new volume of essays, edited by Bianca Kühnel, Galit Noga-Banai, and one of our network members at York, Hanna Vorholt.

Hanna has sent us some further details about the collection:

‘This volume brings together 44 articles by scholars from 15 different countries and is an outcome of the research project SPECTRUM Visual Translations of Jerusalem.

The special position of Jerusalem among the cities of the world stems from a long history shared by the three Abrahamic religions, and the belief that the city reflected a heavenly counterpart. Because of this unique combination, Jerusalem is generally seen as extending along a vertical axis stretching between past, present, and future. However, through its many ‘earthly’ representations, Jerusalem has an equally important horizontal dimension: it is represented elsewhere in all media, from two-dimensional maps to monumental renderings of the architecture and topography of the city’s loca sancta.

In documenting the increasing emphasis on studying the earthly proliferations of the city, the current book witnesses a shift in theoretical and methodological insights since the publication of The Real and Ideal Jerusalem in Jewish, Christian, and Islamic Art in 1998. Its main focus is on European translations of Jerusalem in images, objects, places, and spaces that evoke the city through some physical similarity or by denomination and cult – all visual and material aids to commemoration and worship from afar. The book discusses both well-known and long-neglected examples, the forms of cult they generate and the virtual pilgrimages they serve, and calls attention to their written and visual equivalents and companions. In so doing, it opens a whole new vista onto the summa of representations of Jerusalem.’

Registration is now open for ‘Sharing the Holy Land: Perceptions of Shared Sacred Space in the Medieval and Early Modern Eastern Mediterranean’, at the Warburg Institute, University of London, 12-13 June.

This symposium seeks to address how both Western pilgrims and the indigenous Christian, Jewish, and Muslim Levantine population perceived the sharing of religious shrines with other faiths. In particular, scholars will look at how this sharing is described and explained in contemporary accounts and how this influenced the knowledge of other faiths among the Semitic religions. The symposium will focus on the period from c.1100 to c.1600, addressing the changing political context in the Levant and its influence on the sharing of sacred space.

The programme can be viewed here.

The ERC-funded SPECTRUM: Visual Translations of Jerusalem project documents and examines visual translations of Jerusalem across Europe, including such famous examples as the Temple Church in London or the Sacri Monti of Piedmont and Lombardy, but also a multitude of lesser known sites which have hitherto been studied only at a regional level. One well known English example of these monumental reproductions of Jerusalem is the Church of the Holy Sepulchre in Northampton, built in the early twelfth century by Simon de Senlis, the first Norman earl of Northampton and Huntingdon.

Round nave of the Church of the Holy Sepulchre in Northampton: Laura Slater

On a research trip to the town, however, I discovered that Northampton contains not one translation of Jerusalem, but two:

Model of the Church of the Holy Sepulchre in Jerusalem, Northampton Museum and Art Gallery: Laura Slater

This model of the Holy Sepulchre is owned by the Hutton family and can be visited at Northampton Museum and Art Gallery. These miniature scale models record the appearance and architectural features of the Holy Sepulchre from the period of its 1555 restoration to the disastrous fire in 1808. They are now valuable sources for historians. The models were constructed in relation to the detailed plans and drawings of the Holy Sepulchre drawn up at the end of the sixteenth century by a Franciscan friar, Bernardino Amico. The practical execution of these models was not the responsibility of the Franciscans, but craftsmen in Bethlehem and Jerusalem. The scale models were produced in relatively large numbers in the seventeenth and eighteenth centuries: as souvenirs for pilgrims and grand tourists, and as elaborate diplomatic gifts for rulers.

Inlaid with ivory and mother of pearl, the Northampton model is made out of shittim or shittum wood – better known today as the acacia. The shittah tree, identified with either the acacia nilotica or more usually, the acacia tortilis, can be found across the Middle East, especially in Egypt and the Sinai peninsula. It is probably from here that our model’s materials were sourced. The use of shittim wood to make the Northampton Holy Sepulchre model was not simply a question of using cheap, locally available timber. Shittim is mentioned numerous times in the Bible. It is the material from which God commanded that the Ark of the Covenant and parts of the tabernacle, including altars and holy vessels, be made in Exodus 25-27. The connection back to the Old Testament, and the sense of continuity with a lost sacred object it might provide, helps us understand why these models were so treasured.

The models were designed like Lego bricks – they could be detached and rebuilt part by part, and each individual ‘brick’ was signed with letters or numbers. Every model came with a parchment scroll detailing what each letter or number signified. This might be a bell tower, a gate, a chapel, an altar, the site of a particular tomb, or a place where the Virgin Mary stood during the Passion. In this way, one could inspect every feature of the church, remembering and imagining Jerusalem exactly how one pleased and in as much detail as desired. Nor were such scale models restricted only to the Holy Sepulchre Church. There are also surviving models of the Grotto of the Nativity and the entire Church of the Nativity in Bethlehem. In this view of the south transept facade of the church, still the main public entrance of the Holy Sepulchre, you can see the attention to detail in the model. Just as it still is today, the right hand side of the door has been blocked up. The building on the right, up the tiny staircase, is the medieval Chapel of the Franks, now the tenth station of the Via Dolorosa. 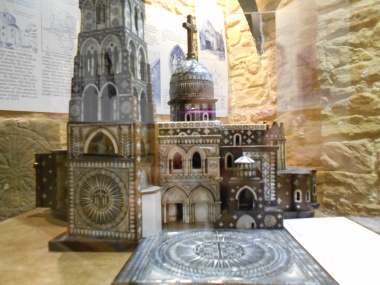 And on the other side of the miniature building is the Anastasis Rotunda, where the empty tomb chamber can be found.

The Garden of Eden at the Holy Land Experience, Florida, taken by Professor Anthony Bale.

All are welcome to attend our opening keynote lecture by Professor Anthony Bale of Birkbeck, University of London, entitled ‘Jerusalem and the Medieval Meme’.

The lecture will take place from 9.30 to 10.30am on Thursday 6th November in Tutu’s, on the fourth floor of the Macadam Building, King’s College London (campus map). It will be chaired by Dr Michele Campopiano, of the University of York.

Professor Bale’s abstract is below:

‘Jerusalem has consistently been reproduced, replayed, restaged, in formulaic ways, from pilgrims’ souvenirs to theme parks. In this paper I seek to go beyond thinking of Jerusalem only in terms of its ‘iconography’ and instead use the term ‘meme’ to explore Jerusalem’s reproduction and reproducibility. I will cover a range of medieval sources – starting with fifteenth-century Jerusalem pilgrims’ accounts of the 1458 voyage from Venice to Jaffa – and will also talk about a contemporary Jerusalem, the Holy Land Experience in Florida.’

We are delighted to announce that Professor Nabil Matar, of the University of Minnesota, will join us at ‘Remembering Jerusalem: Imagination, Memory, and the City’ on 6-7 November, to deliver a keynote lecture.

Professor Matar is renowned for his research on relations between early modern Britain, Western Europe, and the Islamic Mediterranean. His many book projects include the recently published British Captives in the Mediterranean and the Atlantic: 1563-1760 (Brill, Leiden, 2014), Through the Eyes of the Beholder: The Holy Land, 1517-1713 (Brill, Leiden, 2013),  with Judy Hayden, and a forthcoming abridged, translated and introduced edition of An Arab Ambassador in the Mediterranean: Muhammad ibn Ahmad al-Miknasi, 1779-1788 (Routledge, 2015).

In recognition of his “pioneering scholarship on the relationship between Islamic civilisation and early modern Europe,” Professor Matar was given the Building Bridges award at the University of Cambridge in 2012.

Professor Matar’s lecture will be entitled “Sufi Jerusalem in Arabic Pilgrimage Accounts, 13th-18th Centuries”. We will share more details in an abstract in the near future, and are very much looking forward to welcoming Professor Matar to King’s College London.

Organised by the AHRC-Funded Research Network ‘Imagining Jerusalem, 1099 to the Present Day’

Perhaps the world’s most iconic city, Jerusalem exists both as a physical space and as a site of memory, ideas, and re-memberings. In art, literature, film, and history writing; in acts of public and private worship; and in communities across the globe, memories of Jerusalem have, for centuries, been created, invoked, and relived. This cross-period, interdisciplinary conference invites paper and panel submissions on the theme of Jerusalem and Memory, c. 1099 to the Present Day. Topics may include, but need not be limited to:

The organisers are particularly keen to receive panel submissions which address a shared theme across more than one discipline and/or historical period.

Abstracts of c. 300 words for single papers and c. 1000 words for panels consisting of three papers should be sent to imagining-jerusalem@york.ac.uk by 1st July 2014. For more details or inquiries, please contact the same address or visit the Network website: https://jerusalems.wordpress.com/ 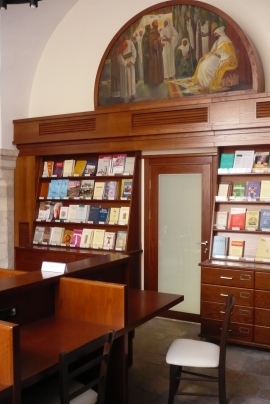 Between the walls of the Old City of Jerusalem, among the narrow and busy streets of the Holy City, there is a place which is remarkable for its peacefulness: the Franciscan Convent of San Salvatore. It is one of the convents of the Franciscan Custodia Terrae Sanctae. Following the example of the founder of the order Saint Francis, who visited the Holy Places, the Friars Minor have had a continuous presence in Jerusalem since the 14th century. They have welcomed and helped pilgrims since the Late Middle Ages, and they continue their function as ‘guardians’ of the Holy Places for the Catholic Church.

One of the first things a traveller will notice by entering the walls of the convent is the fascinating encounter of languages and forms of writing: Latin, Arabic, Hebrew, Italian (the official language of the Custodia) and many other languages all resound among these ancient walls.

The Custodia is also an important centre of learning. It hosts the library Biblioteca Generale della Custodia di Terra Santa (the General Library of the Custody of the Holy Land), with its important patrimony of manuscripts and modern and ancient printed books.

The library is in a crucial phase of reorganisation and modernisation in order to improve the availability of the patrimony for scholars. Thanks to the kind hospitality of Father Lionel Goh, the director of the Library, and of the helpful employees of the Custodia, I have been able to spend a month in Jerusalem working on the medieval manuscripts of the Custodia. My research will be presented in full in a book I am writing about the history of the Franciscan presence in the Holy Land between the 14th and 16th centuries. Some of the first results of my research will be presented in an article to be published in a collective volume edited in Italy by Franco Cardini.

The scholarly activity of the Franciscans themselves is expressed in particular by the work of the Studium Biblicum Franciscanum which publishes extensively on biblical archaeology and exegesis, as well as on the history of the Holy Land. Many of the publications of the scholars of the institute can be found in the lovely Franciscan Corner- the Franciscan International Bookshop, near Jaffa Gate, in front of the Tower of David. In this bookshop the publications of the Franciscan Printing Press of Jerusalem and of the Edizioni Terrasanta of Milan, and other books on Biblical studies and the Holy Land and its history can be found. When you enter Jaffa look on your left side, you’ll be pleasantly surprised!

Imagining Jerusalem
Create a free website or blog at WordPress.com.